A few days ago, we got the results of my husband’s liver biopsy.  The final verdict, it is in Stage 3 (Bridging Fibrosis).  He is living healthy and totally out of liquor, faithfully drinking more water and natural healthy juices instead of soft drinks; exercising and out of cigarette smoking but the change of his living lifestyle doesn’t stop the virus to create further damage. We are persistent that together with God’s guidance we will overcome this and he will be healed.

While we were at the waiting room, the nurse came and asked a familiar and unchanging  questions like do you smoke? do you experience pain in your liver?  Are you having hard time sleeping, nausea, bloody stool and vomiting and etc.,  Once again they asked if my husband is still under the care of the doctor who first saw him for his liver treatment evaluation.  I felt a bit annoyed, and thought aren’t they updating their records and asked the same question asked him the last time we went there.  But still I chose not to say anything.  The attending nurse advised us to wait for the nurse practitioner who will explain to us the results, the door was shut, and for us not to be bored we played the thumb war and laughed with each other.

In a few minutes, the door opened and a tall -blond hair woman wearing white entered followed by a familiar face of a nurse.  After some introduction, she read the results in front of us.  Joshua and I diligently listened not wanting to miss any word.  When I heard the statement, “there was an advancement that happened from the previous biopsy you had last 2009” my heart jump thinking it was a positive words but when she followed it, according to your record before you was in Stage 1 and now you are in Stage 3.  I was stunned and I looked with my husband who remained calmed.

For the purpose of understanding the status of my husband’s liver as diagnosed with Stage 3 or the Bridging Fibrosis, I will use the scoring system Physicians use to measure the amount of Fibrosis (scarring) and inflammation of the liver in patients with hepatitis C.

In Stage 1 and 2, scarring is minimal to mild and the liver still functions normally. 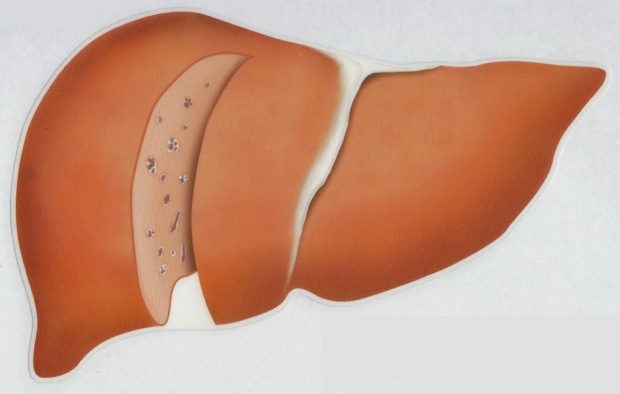 By Stage 3, however, the function of the liver start to be affected.  The fibrosis starts spreading throughout the liver, replacing normal liver tissue and interrupting the flow of blood.  This may result in the buildup of bile and fluids and the discoloration of the liver tissue.

In Stage 4, advanced scarring, or cirrhosis is evident.  As the liver loses its ability to remove waste products due to abnormal blood flow, fluids may begin to accumulate in the abdomen, otherwise known as ascites.  During this decline in liver function, a patient may experience symptoms such as loss in appetite, nausea, weight loss, change in liver size, gallstones, generalized persistent itching, and/or jaundice, a yellowish discoloration of the skin.

He had his second liver biopsy procedure last November 19 of this year.  We waited for a matter of weeks before we found out the results.

12-hours without eating (prior the liver biopsy)

Joshua, being exhausted without eating food 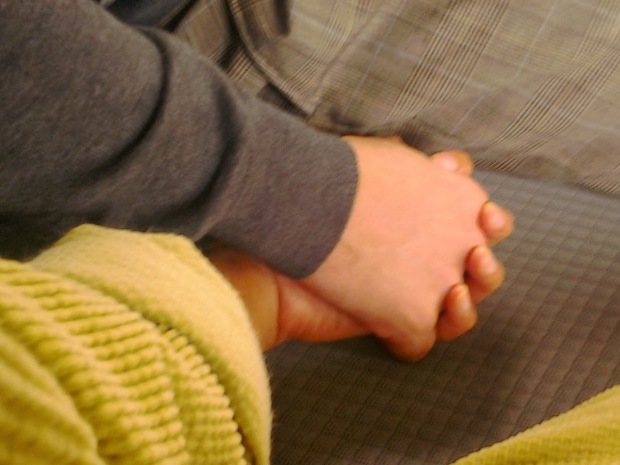 In the year 2009 (he was still single and didn’t know each other yet), when he had his first liver biopsy, the result was a healthy liver with no mark of scarring.  That time he was not conscious of taking care of one of the vital organs of his body, he was living his life to the fullness, being wasted, drunk, recreational drugs, as he said you name, it he tried it all.

We are both aware that Joshua’s liver condition is a serious matter mostly to a newly weds like us.  His father died this year because of liver failure but it doesn’t stop us to faithfully believe that in everything that are happening in our family now, good or bad the Lord is in charge.  That he has a greater plan on top of this.  I am not trying to sound religiously, but we choose not to loose our faith, to trust God, and let his will be done on us.

Jeremiah 29:11
New American Standard Bible (NASB)
For I know the plans that I have for you,’ declares the Lord, ‘plans for welfare and not for calamity to give you a future and a hope.

On my quiet and prayer time, I cried to God to heal my husband, to miraculously vanish away the viruses in his blood.  At night, when Joshua was asleep, in tears, I prayed for him.  I pleaded God to have mercy in us, in my husband to spare his liver for further deterioration.  Whenever we prayed together, one thing that I noticed with Joshua, I never heard him asking healing for himself but for others.  Me, I became so optimistic to declared;  “Thank you Lord for healing my husband’s liver!”  But, who can fathom the mind of God?

Romans 11:34
New American Standard Bible (NASB)
For who has known the mind of the Lord, or who became his counselor

Days had passed, and during our waiting God changed our heart’s intentions.  Many times Jesus Christ in his words reminded me that he is our Jehovah Rapha, the Lord our healer.  Yes, he had all the power to renewed and removed the fibrosis, and normalize Joshua’s liver functions, why not? he is a God who laid the earth’s foundation.  He has the eternal and sovereign power to change the situation we have.  But if the scenario change to it, what will happen to our faith if its parameter is based only on what we can get from him without enduring anything?  If its measured only on the blessings and all the answered prayers he allowed us to experience?  I am blessed and encourage how my husband modeled his walked in Christ.  He never flaunt in his words that he loved Christ but he modeled it through examples, by how he lived his life daily.  Quoting what Joshua said, “We will never curse God for things we suffer in this temporary world”.  Instead of dictating what we wanted to happened in this illness, our prayers became united.  We asked God to let his will be done on us, but one thing that we kept on requesting is for God to prepare our hearts, to let the peace coming from him rule us, accepting whatever the truth behind the results might be.

Going back to the moment that we were still in the waiting room, the nurse practitioner explained everything with calmness as if she was just explaining a “symptoms of fever” and not liver disease.  At that time, we asked her so many questions while holding each others hands and still remained calmed.  As I said with the Liver Biopsy article I wrote, In starting a treatment, it’s very important to learn about it and the disease.

Inside the waiting room

The next phase of our journey is having his full liver ultrasound before doing the actual treatment which was scheduled next year.

On our way to the parking lot, I asked my husband what does he felt when he heard about the result.  He just said, he needs to be more extra careful, totally no liquor even though he doesn’t drink anymore.  If you will ask us if we felt some carnal sadness, yes we had.  In fact while he was driving on our way home, I myself cried when I saw that he became teary eyes when we were talking about fighting together this illness knowing that we already have Abigail, our first child that will soon be united with us this coming March.  The arrival of our little child made him more persistent to fight the Hepatitis C virus that are messing with his blood and now his liver.  It was a precious thing that we have hope in Christ.  We started to laugh at one another while in tears, listening to the song Healer by Kari Jobe.

Cooking and baking are the two daily domestic things I will never become tired of doing.  When I was young aside of fishing in the flood (which is another story of me being adventurous), playing with my plastic kitchen toys made my childhood days colorful.  I had a complete set of kitchenware’s from casserole, pan, plates, glasses down to spoon and fork.  My sister, who is a year older than me whenever she had extra coins, she never forgot to surprised me with a piece of plastic kitchenware every time she was tasked doing the grocery at the wet market.  Unlike what you can see from ToyRUs, my kitchen toys were cheap and simple, the one that you can get from buying cheese curls or other non name brand chocolate.

My love in cooking and baking was enhanced when I went to a vocational High School.  The school offered a subject about an introduction to Food Technology and when I reached my Junior year, I had my major with the same related field of study which I earned a skilled and techniques in basic cooking and baking.

Now that I am married with a wonderful and not too picky man, this skill that I gained through practice and passion towards it is well used daily.

This coming Christmas, a season for love, giving and sharing I proposed to Joshua the idea of making Pulvoron, a filipino sweet delicacy that is made of flour, non-fat dry milk, sugar, butter and nuts to be given away as a token of our appreciation for others to indulge.  He agreed with the idea and bought some of the ingredients that is not yet in our pantry.  Aside that its easy to make, its yummy, nutritious, affordable, and rare in Tennessee.

Not forgetting that the essence of Christmas is commemorating the gift of God for us, the birth of our Savior Jesus Christ, not just celebrating for only a season but every moment of our lives and sharing it to others.

As our gift to you, here is our recipe of Home made baked Pulvoron:

In a wok, toast the flour in a medium fire for about 3O minutes until lightly brown.  Turn-off the stove, adding the remaining dry ingredients into the toasted flour such as sugar, non-fat dry milk, salt, and toasted walnuts then thoroughly mixed, set aside.  Mix the vanilla into the melted butter and add the mixture into the rest of the ingredients, mix it until the butter with vanilla is thoroughly absorbed.

If you don’t have a Pulvoron molder, you can use a measuring cup as an alternative moulder.  In our case, we used a cup as a molder with 1/4 in measurement.  Preheat the oven to 350 °F.  Bake for 5 minutes and cool down then refrigerate before wrapping to make your Pulvoron more firmer.  Serve it with a home made tea, enjoy!!!

The Haltom Family Blog is created to encourage families through our imperfect stories and experiences with Relationship & Marriage, Parenting, Home Education, Mental Health, Philippine and US Immigration and Herblend Teas Holistic Health & Wellness

Our prayer is that may we all become more encourage and be joyful to pursue a grace-filled life to the perfect love of Jesus Christ.